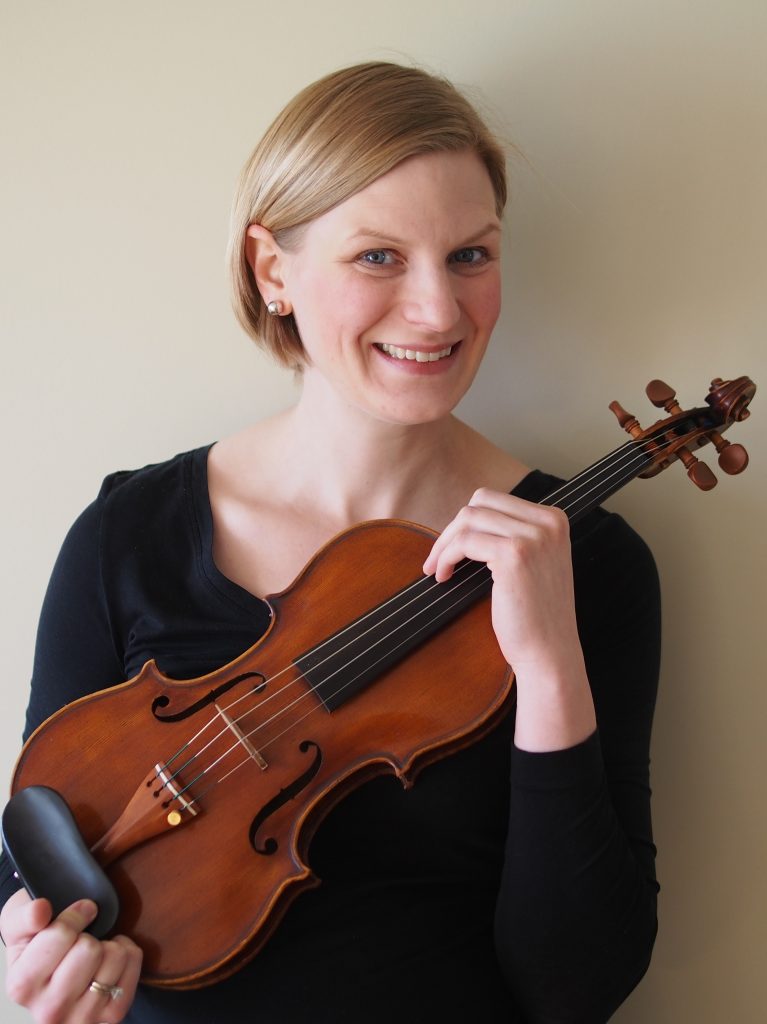 Instrument: violin
Member of the Saint Joseph Symphony since: 2009
Bio: Catherine graduated with a Bachelors of Music in performance from Southern Illinois University-Edwardsville in 2007.  She spent 18 months teaching in Omaha, Nebraska and playing for the Omaha and Lincoln symphonies before she moved to Kansas City in 2009.  Catherine began building her teaching studio in Kansas City and later attended Park University.  She earned her Masters of Music in performance in 2012 studying under the instruction of Ben Sayevich. Catherine has been playing with the SJSO since 2009.  She won the principal 2nd violin position in 2012.  In 2013, she had the opportunity to live in South Korea and also delivered her first child over there.  After 2 years of being away, Catherine is thrilled to be back in the U.S. and to resume her teaching and orchestral position with SJSO!

How did you get your start in music?
When I was in kindergarten, there was a boy in my class who played violin and I wanted to play too.  My mom set me up with a private teacher and the rest is history.

When you’re not rehearsing or performing, what music do you like to listen to?
With my two year old daughter, I definitely get my fill of Disney music on a regular basis, but on my own, I listen to a variety of people.  Artists I would see in concert are Ingrid Michaelson and Kansas City’s local band, Barclay Martin Ensemble.

Hobbies?
Going out for a nice run, watching a good movie, reading books of interests, visiting my local farmers market and coffee shopping with my friends.

If you weren’t an orchestra musician, what would you be doing?
I enjoyed chemistry and probably would have pursued that but definitely something more down the science line versus the arts.

How do you think we should keep symphony music alive for new generations?
It seems like there are programs in place helping us move in the right direction. There is more and more research showing how music is so influential in a kid’s  performance at school and the earlier we can introduce it to them , the more integrated it will be in them from the beginning.  Symphony music shows prime examples of the foundation of western music and hopefully kids can seize the opportunities and appreciate the exposure they get.  It is truly a privilege to be able to learn an instrument and hopefully no one takes that for granted!